Biographies of George and Katharine Calderon

GEORGE LESLIE CALDERON was born at St John’s Wood, London, on 2 December 1868, the fifth son of the Victorian painter Philip Hermogenes Calderon, Keeper of the Royal Academy, and Clara Storey, sister of the painter George Adolphus Storey.  After Rugby and Trinity College Oxford, he decided to learn Russian because ‘Russian was little studied in England; it was a subject with a future and promised an interesting field of work’.  Whilst training as a barrister, therefore, he also prepared himself for this alternative occupation.  Having failed to find work as a barrister, he left for Russia in October 1895.  He spent two years there working as a teacher, correspondent for the Standard, and scholar.  On his return in 1897 he learnt several other Slavonic languages and in 1900 became an assistant librarian at the British Museum, whilst pursuing his research into Slavonic folklore and publishing many stories, articles and translations.  In the same year he married Katharine Ripley, the widow of his university friend Archie Ripley.  He left the British Museum in 1903 to become a full-time writer.  His first satirical novel, The Adventures of Downy V. Green, Rhodes Scholar at Oxford, came out in 1902, and his second, Dwala, in 1904.  In 1906 he visited Tahiti.  On his return he became a prolific reviewer for the Times Literary Supplement.  Between 1908 and 1910 he played a prominent part in the public debate about votes for women.  In 1909 his play The Fountain was performed by the Incorporated Stage Society and he became the first person to translate into English and successfully direct a full-length play by Anton Chekhov (The Seagull, at Glasgow).  The Fountain was subsequently staged and toured by all the new repertory companies and Calderon’s curtain-raiser The Little Stone House became so popular that it was imitated by Rupert Brooke.  During 1912 Calderon led a campaign for volunteers to keep the mines working during the Coal Strike, then himself unloaded cargo for two months during the London Dock Strike.  His play Revolt, about industrial relations and new sources of energy, was performed by Manchester Repertory Company in November of the same year with Sybil Thorndike as the heroine.  Between 1912 and 1914 he published notable translations of Chekhov and Il’ia Tolstoi, wrote more one-act plays, and worked on ballet libretti for Fokine.  In August 1914 George Calderon succeeded in enlisting in the British Army at the age of 45.  He saw action in Flanders, was wounded on 29 October, recovered in London, and was sent to Gallipoli in May 1915.  He was killed at the battle of Achi Baba on 4 June 1915.  His book Tahiti was edited by his wife and Percy Lubbock and published in 1921 to great acclaim.  In 1925 a production in London of his translation of The Cherry Orchard established Chekhov as a new force in the English theatre.

KATHARINE CALDERON was the seventh child of the Irish landowner, philanthropist and religious writer John Hamilton (1800-84).  She was born in Donegal in 1867.  Katharine was a gifted artist and studied at the A.S. Cope and J.W. Nicol School of Painting.  In 1895 she married the barrister Archibald Ripley, who had been at Trinity College Oxford with George Calderon and was an uncle of Percy Lubbock.  Ripley, the youngest of ten siblings brought up at Earlham Hall, Norwich, died in 1898.  In 1900 Katharine married George Calderon and used her social and literary contacts to work as his literary agent.  Their home in Hampstead became a centre of literary, artistic and intellectual life.  During the First World War she volunteered as a Red Cross nurse.  After George Calderon’s death was confirmed in 1919 she threw herself into the publication of his selected works and the creation of Percy Lubbock’s book George Calderon: A Sketch from Memory (1921).  In 1934 she settled in Kent, where she could be near to her relations by her first marriage, the Lubbock and Pym families, and died in a Brighton nursing home on 30 January 1950. 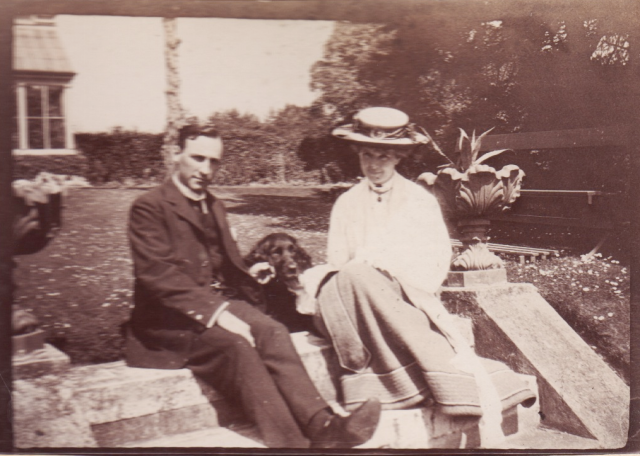